Back in the day when we were younger and flush with cash (ie: not thinking about the future) I would buy a Honeybaked Ham for Christmas to bring it to SM's big family get-together. 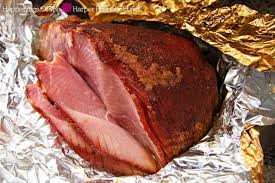 That sucker would be opened and eaten within the first few hours of arriving by the general horde that included liquored-up friends and family.  About 30 people picking at that ham reduced it to the bone in no time flat.

The remains would be made into whatever soup Moose felt like making. "Yes" I have a brother in law named Moose and "Yes" Moose can cook.

Ah, those were the days.  We were all young and wild.  Now we're older and some of us have grandkids and extended families and we don't get together for Christmas anymore.  We save those big reunions for Summer.

Anyhow, when it comes to our Christmas dinner these days I usually waffle between a nice beef tenderloin or a ham.  I stalk the local grocery ads waiting for the price of a whole tenderloin to go on sale.  Chop it up into three's and cook one of them.

I'm noticing though that beef is more expensive this year so when I got the Honeybaked Ham coupon in the mail I actually thought about buying one again as a treat.

"Don't you want to just get one at the store and glaze it yourself?"  SM asked.

I shrugged.  "Well, yeah.  I can do that.  I'm just not happy with the glazes I do so I thought that maybe a Honeybaked would be a nice change."

"You know it's going to be twice as much as a regular spiral?"

"Even with the coupon? I thought if it was only going to be $10 or $15 dollars more it might be nice for a change."

So SM got online and poked around.  Holey Moley!  A half Ham is quoted to run between $55 and $85!  Geez...If I want to pay that I might as well buy the tenderloin!

I've got some clover honey and brown sugar in the pantry just waiting to slick all over that bad boy.

So what are you having for Christmas dinner?
at December 22, 2014