Get Up And Do It Again...Amen

Yesterday morning started off with SM and I on the back porch listening to baby birds chirping (ie: screaming) for their food as their parents zoomed to the nest loaded with bear, I assume.

First the sparrows on the right, then the robins in the holly bush to the left.  Back and forth we listened to the kids clamoring for breakfast when suddenly SM spied the male robin fly out of the bush and land near our blueberry bushes.

We saw him fly up and attack the bush, grabbing the berry and taking it back.  He did this several times to which SM asked me "They're not ripe yet are they?"

"Not my idea of ripe." I replied and it was game on. 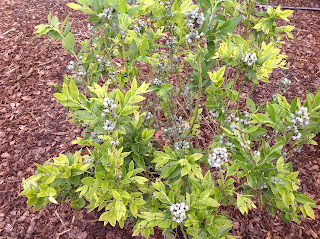 It was 7:30 am as I wrapped the blueberries with netting and I didn't come back inside the house until it was close to 4.

Yesterday was what I would call a good day of hard work.  A day that satisfies the soul of folks who live for accomplishment through simple manual labor.

That muscle aching pull that stiffens your step.

That feeling that your skin is under there somewhere beneath the dust, dirt, sweat and (yes) paint that coats it and makes a hot shower on a hot day a pleasure.

I walked 3 miles before 7am and my Fitbit vibrated my 10,000 step as I hoed the weeds and Bermuda grass one more time before the vining winter squash and pumpkins took over the patch.  Dust flew up and attached itself to me as I hoed and pulled, hoed and pulled. 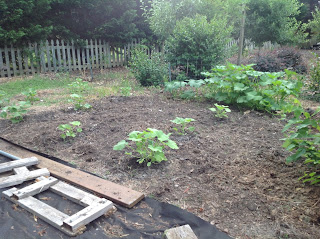 Something ate all my sunflowers and I mentally cursed the beast while swearing to plant more as I wiped the sweat from my face.  The dirt is bone dry and fluffy.  We're hoping for rain this coming week.  At least that's what the forecast says. 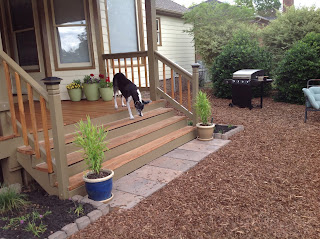 I then grabbed the paint brush and attacked the house.  Up and down on ladders, in and out of railings, scraping dried paint from window glass, cleaning brushes...That was the rest of my day. 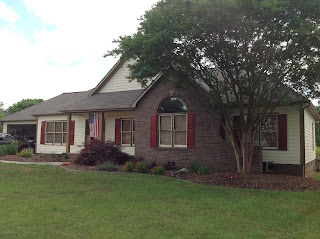 I painted in the shade of the house with my IPad tuned to classic rock station out of Boston.

Great station.
And then The Pretender by Jackson Browne came on.
And I thought about the lyrics.

There isn't much about that song that I don't like and it got me to thinking about work.

And then there's the work around the house that pays me back with a currency that's priceless.

It's good to have a balance of both I suppose but I know that if I was marching to my own drum, the days would never blur together like they do when I'm on that hamster wheel working for the man.

I guess that's why a day like yesterday felt so good.
I needed a reminder of why I do the work.