Am I an honest person?

I mean...Sure, a little white lie will pass my from my lips from time to time especially if telling the truth causes more grief than what it's worth.

But I've always been uncomfortable with the thought of lying.  I squirm and break into a cold sweat.

Nope.
Honesty is the best policy.
For me at least.

But sometimes things happen that make you look like you're trying to cheat the system when you're really not.

We went to Sam's Club last month and checked out through the self-checkout.  We had bought around 8-10 items and the packaging is supersized so the cart was full enough.  On the way out to the car though I noticed that I had stuck a case of Diet MtDew under the cart.

I paused and looked at the receipt.
Not there.

I swear we stood there for 2-3 seconds and I KNOW what we both were thinking.

It was an honest mistake.
An oversight.
The Doorgirl didn't catch it.
Screw it!
It's only $10.

But I live with a REALLY deep fear of being a stupid old person and walking out of a store without paying because I'm a dingbat and forgetful and getting arrested for shoplifting and being hauled off to the slammer...Well, you get the idea.

And so we headed back in to pay for the Mt Dew.

The Doorgirl was surprised.  "There ain't many honest people out in the world these days.  Most would keep going."

I didn't tell her that I had considered exactly that.

A week or so later, I lost my favorite twenty year old winter hat while walking Casey around the neighborhood.

I'd shoved it in my pocket during a hotflash (Yes, I'm STILL having those) and it must've fallen out so I KNEW it was around there somewhere.

I walk in the dark these days and so for almost a week I would look along the streets and in the yards with my flashlight searching in despair for my hat.

One morning, I mentioned to Ray that I needed to find a replacement hat.  That someone had probably picked up that old rag of a hat and tossed it out.

And so I went out dejected and took Casey for her morning walk.  We were half way around when Casey stood next to a mailbox and stuck her nose straight up in the air sniffing.  Something was on the mailbox post.

I was SO HAPPY I swear I danced the rest of the way home. 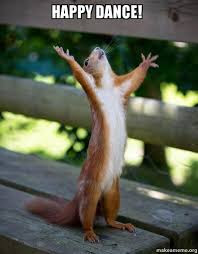 It made my day!

This crappy, worn out twenty year old hat that fits my head perfectly was back in my hands.

"Karma."  Ray said when I danced in all excited.

Now...Anyone wanna promise to be my Go-To person twenty years from now when I'm stuck in jail for being an old dingbat and forgetting to pay for my purchases?