We have taken to feeding the birds again these past few years.

Back when Scooter was alive, we had to stop because he would go around eating the birdseed that was on the ground, discarded. And then he would poop out very disturbing poo that looked like some kind of European pastry rolled in seeds. 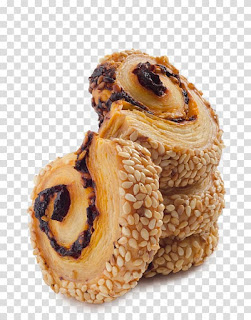 Now that he is no longer with us, we have established a backyard bird heaven.  Bird houses, bird baths, bird feeders. Whenever I sit on the back porch or look out my windows in Winter, my "nocks" (Binoculars) are never to far from my hands.

When we moved here, there was nothing in our yard. No trees, no bushes...nothing.  Now, SM and I marvel at the fact that we've been here long enough to create an environment that encourages wildlife to stop by and sit a spell.

At first all we had were the common sparrows and finches and doves.  But as the years have gone by we are seeing more and more variety of birds.

We have all the typical backyard birds that you would expect along with the ever present squirrels that like to take advantage of the free food. Over that past few years, we've also noticed an increasing hawk presence that has been enjoyable to watch.

We don't raise chickens so I have no problem having these beautiful birds around.  SM hates to see occasional bird kill but I remind him of the "circle of life".  They miss more often than they strike so it's no big hurt on my heart. 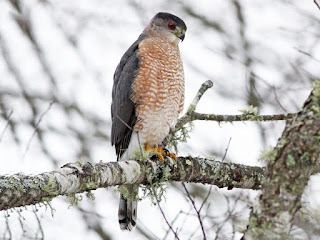 Once, and only once, we saw a Cooper's Hawk which is a beautiful bird to see close up.  Those red eyes! We think our resident Red-Shouldered Hawks likely chased him out of their territory. 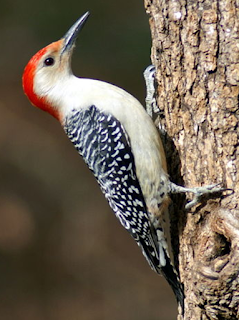 We have a resident Red-Bellied Woodpecker that hangs out in my neighbors yard. He swoops in for some seed from time to time. And we have seen some Downy Woodpeckers also but haven't figured out where their home base is yet.

Anyhow, with it being Winter, we have been very attentive with keeping our feeders full. And now word has gotten out.  The Cowbirds have found us. 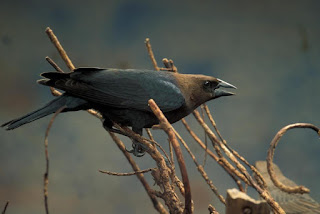 So far, they swing by for breakfast and then again dinner. Since they don't stay longer than 20-30 minutes, I don't mind. Cowbirds gotta eat too. And then everything calms down and the doves, sparrows, chickadees, finches...everybody else can get theirs.

Probably my favorite new bird to my backyard is the Tufted Titmouse.  Love his soft colors. 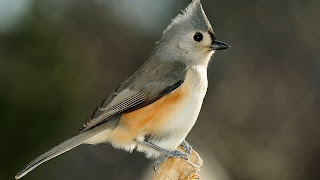 During spring and summer, we will see Goldfinches and Bluebirds buzz by.  They never stay for long.  I might need to invest in separate feeders if I want to encourage a visit.

One year, we had a Bluebird try to nest in one of our boxes. Not sure what happened but after about a month they abandoned the nest.

All in all, I think we are on the right path.  Seems like every year it gets better and better. What's it like in your backyard?  Any advice?