Well, technically I should say that it's "23 and My Younger Sister" but her results would me mine as well so when she texted me that her results were in, I was very curious.  Her daughter had purchased the kit for her as a Christmas present. 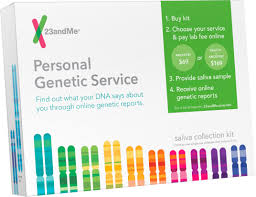 My sister emailed me the link to her results and (after creating my own account) I was able to view our DNA ancestry results.

80% of which comes from the North Rhine-Westphalia region with a dash of Scandinavian and British-Irish tossed in. (Now I know where my Rosacea comes from.) We also have hints of Portuguese to add a little flavor.

The report was an interesting read to be sure but it didn't really offer up any information that we didn't already know.

Some people are really into their family trees. SM's brother was into Ancestry.com and took their Maternal side back into the mid 1700's in Poland.

My sister says she wants to work on our family tree now.

She has also said she wants to do the Health Predisposition Report at some point.

We chatted about the "do you want to know" aspect of it.  Health-wise the only big drama in our family is Dementia-Alzheimer's in our later years. We have it on both sides. The chance of this report having any other earth-shattering data is unlikely, but it's possible.  I've read stories of women who found out they had the BRCA gene from 23 and Me.

So the question I ask is "Do You Want To Know?"

Would I want to know?

Yes, if SM was no longer around, it would be nice to have things situated in advance with a relative I trust if I knew Alzheimer's was in my future since I don't have children.

My sister says "23 and Me" can provide her with her health report if she pays an additional $125.  She is saving up for that. I'll be curious to see what her report says.

Will I jump on genetic testing anytime soon? Probably not. But if my sisters results come back with something surprising, then I'm sure I'll reconsider.

For now though, ignorance is bliss so lets eat, drink and be merry!