When a hawk decides to visit our bird feeding area, it's like an explosion goes off.

Birds fly in every direction and sometimes one will hit our windows.  This happened the other day and SM went to the window looking out at the ground to see what stunned bird had taken the hit.

It was a female Cardinal.  She lay just below the window.  We watched, waiting for her to recover.  She was breathing, we could see that but did not appear interested in moving.

Then the Blue Jays started up calling loudly at each other. Clearly the Hawk was still around somewhere.  We looked to the sky and saw him flying by.

SM put his shoes on and went outside, gently picking up the Cardinal.  He went towards one of the big holly bushes intending to place the bird underneath when "BAM" another hawk burst out of that bush into one of the trees.

I watched as SM came back up onto the porch with the Cardinal still cupped in his hands. I stepped outside with him while he decided to place the young Cardinal on our porch swing, nestled up against pillows for protection.

We could see the bird from our window and SM would check every so often.  The Cardinal sat in that protected nest for two hours before finally venturing forth, hopping up on top of the cushions and flying to the nearby Maple. 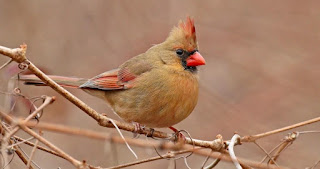 "Wouldn't it be nice if she comes by sometime and perches nearby to let me know she appreciates saving her life?" SM asks me.

"I'm sure she will." I told him, my heart melting just a little.  Like most men, he acts tough but he's got fluff in his middle.