It was nice enough yesterday to sit outside on our Southern-facing back porch and enjoy some sunshine on our faces.  SM had the TV on but that never stops us from having conversation about life, thoughts and (ugh) feelings.

"I feel like I'm becoming a dinosaur." I said.

"How so?" SM asked with a confused expression on his face.

Poor man.  He's been married to me for 34yrs and knows that strange things pop out of my mouth with alarming frequency.

"You know, with work. How I see the world. Interacting with the world in general." 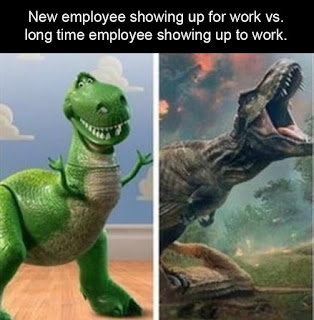 SM isn't one for philosophy so he seized on the word "work" and asked me to explain further.

"I guess I mean my chosen career path. Would I encourage someone younger to make the same choice I did 30yrs ago?"

I was flailing around trying to put into words my insecurity about jumping back into the job pool after nearly a year of being unemployed.  I suppose I would feel the same way about trying to learn how to date again after all these years.

The world has changed since I was a puppy and now that I'm outside looking in, I'm not feeling like joining the party again.

It's tedious. It's underappreciated.

I'd rather "retire" than jump back in.

I came across an interesting article on BBC that sort of highlights my feelings about being a dinosaur.

The Computers Rejecting Your Job Application